Enough already! I’m ready for fall. I love Southern California and even the seemingly lack of seasons we have here but enough is enough. We have had heat wave after heatwave with humidity all mixed in which we are not used to here. I’m so ready for boot and sweater season. Because of this heat wave, my parents got a hotel at the Manhattan Beach Marriott for the sole reason of my niece using its pool to beat the heat and I was just there to tag along. I’ve been doing well with flexible dieting but I knew on Saturday that I probably wouldn’t be able to have a lunch that i could track so I decided I would have a large breakfast and just pack a snack. Big mistake since I had to put on a bikini for the pool right after said large breakfast lol. Dang it. Food baby. Nonetheless, it was nice to feel that the tie bottoms I put on fit a lot more loose than the last time I wore them. had to re-tie them. Top fit the same. I still have no boobs. Too bad cutting weight doesn’t mean gain boobs. Here’s what it look like roughly…I’m really terrible at selfie progress shots. 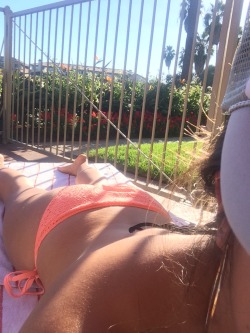 There is definitely less visible fluff. But still fluff. Sucks I don’t really have “before” bikini shots because I avoided all cameras like the plague before. Progress pics are important though. I now realize that. They help keep you sane in case the scale isn’t moving or moving the wrong way.