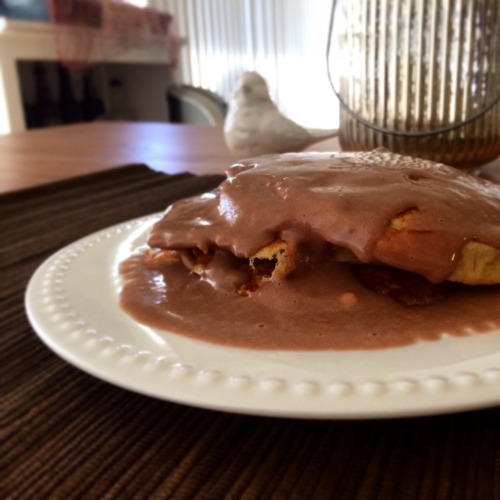 I know. Not super pretty, but I’m such a newbie to the pancake world as it was never really my thing growing up and just avoided them normally. Then during my paleo years I only attempted paleo pancakes a few times and didn’t turn out so well haha. Though my friend, Jenny (Talk To Me Goose) can knock out some amazing paleo pancakes. But, since entering the flexible dieting world, I’ve been seeing more and more variations of protein pancakes so figured I’d give them a whirl! Made some Flapjacked Protein Pancakes (as directed) the drizzled with a protein powder/Greek yogurt mix on top. Actually was really good! Total of 33g of protein in this brekkie! FTW.
In other news…now, fair warning, this isn’t much yet, but it’s a difference! Sitting like this, would usually yield some rollage (yeah, not a word, but you get it) that I would never think about exposing. Ever. But look! This doesn’t look TERRIBLE…shaping up…slowly. What, what? It’s me, SITTING, and I’m actually not horrified.